Shortly after removing all of the wallpaper in the house we discovered that we had calcimine paint. I had never heard of the stuff before, so I took off on an internet quest for knowledge. Several of the posts that I read had me shaking in my boots for fear we had taken on a renovation way over our heads! And just after having the hardwood floors refinished and white carpet put down...

But let me back up a little. How did I discover that I had calcimine paint? Well, it started with a Google search for "primer slides off wall."

Oh yes, the day I finally decided to tackle the walls of the teens' study room. I tarped off the furniture, I masked, I sanded, and I started painting on the primer. I was feeling pretty good. And then I noticed the primer was sliding down the wall. I quickly skimmed the paint off the wall the best that I could, trying not to cry. I felt so defeated. I was already overwhelmed by the house. It wasn't suppose to be a project house.

My research soon informed me that we had this stuff called calcimine paint, a whitewash used around the turn of the century which contained limestone, glue binders and water. It came in a powder and was inexpensive to use for decoration and spring cleaning over coal soot near fireplaces (we have a coal fireplace). It could be applied to plaster walls before they were fully cured as well (we have lathe and plaster walls). And then I did the "spit test" rubbing the chalky substance off on my fingers "like chalk from a chalkboard" (yes, old enough to know this feeling immediately). AND modern paint will not adhere to calcimine paint.

I continued my research and found product names and recommended courses of action, and the name of a good local independent paint store. I found a blog documenting a similar renovation and contacted the blogger, who was immensely helpful.

And today we finally made it to the paint store and walked away with a plan of action. I have a paint fan on my desk and color chips spread across the floor. But before anything else I have some walls to wash with warm vinegar water. And then we can begin with the shellac primer.

And I thought the plaster repair was going to be the icky part! 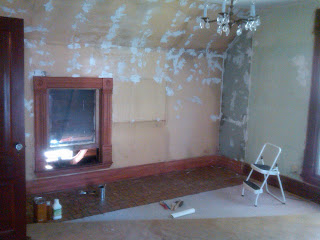 This room, upstairs, is in the roughest shape. We removed a built-in from the wall and exposed a window from the original exterior, now covered after the addition of the screened porch. The walls are stripped down all the way to the calcimine paint. You can see the old solarium flooring, exposed after removing the old carpet.

Eventually this room will become the study room for Elle and Mara.